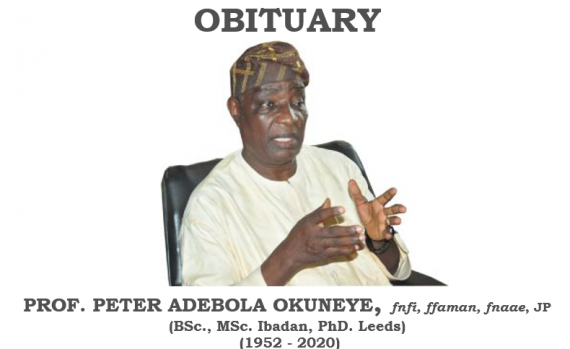 The death has occurred of Prof. Peter Adebola OKUNEYE, a Fellow and former President of the Nigerian Association of Agricultural Economists (NAAE) between 2011 and 2017. The untimely death occurred on Monday 8th June, 2020 at the age of 68 years.  Prof. Okuneye was born on the 23rd day of December, 1952 in Ijebu-Igbo, Ogun State. He was a world renowned and erudite scholar in Agricultural and Environmental Economics who blends theory with practical issues in examining and solving problems of social, economic and environmental dimensions.

Prof. Okuneye started his educational career in Ijebu-Ode Grammar School, Ijebu-Ode and then proceeded to Ago-Iwoye Secondary School, Ago-Iwoye, all in Ogun State. After his secondary education, he gained admission to the premier University of Ibadan where he obtained BSc in 1975 and MSc in 1978. Thereafter, he proceeded to the School of Economic Studies, University of Leeds, England and there obtained PhD in 1982.

Okuneye was a Professor of Federal University of Agriculture, Abeokuta where he served as Head of Department, Dean, Director and Chairman Committee of Deans and Directors. He also worked with University of Ilorin, University of Lagos, Nigerian Institute of Social and Economic Research (NISER), National Open University of Nigeria among others.

Prof. Okuneye was a very charismatic and dynamic leader and has the ability to put life and energy into dying systems. That was why he was called upon to help resuscitate the ailing Farm Management Association of Nigeria (FAMAN). While he was making success of that difficult assignment, every concerned agricultural economist in the country at the time felt that it was his job to put back to life the comatose Nigerian Association of Agricultural Economists (NAAE). This assignment, he accepted and began as a Vice President to Dr. Salisu A. Ingawa in 2007 and became a full-fledged President in 2011. During his entire career in NAAE, the Association was resuscitated, the Journal re-engineered, the frequency of the conference was restored. In fact, a very dramatic event to show that the Association was fully back to life was in 2012 at Ife where four Universities bided to host the 2013 conference whereas in 2010, we had to appeal to University of Benin to host the conference in 2011. Prof Okuneye would be greatly missed in the NAAE family but it only calls for higher dedication and commitment to ensure that the Association does not go under again.

The Nigerian association of agricultural economics (NAAE) is a voluntary, non-governmental and professional association aimed at fostering...
Join Us Today
© naae.org.ng Powered By Techpiox